Amanda DaSilva, Otis College Alum and Veteran, on Her Passion for Product Design | Otis College of Art and Design
Skip to main content

Amanda DaSilva, Otis College Alum and Veteran, on Her Passion for Product Design 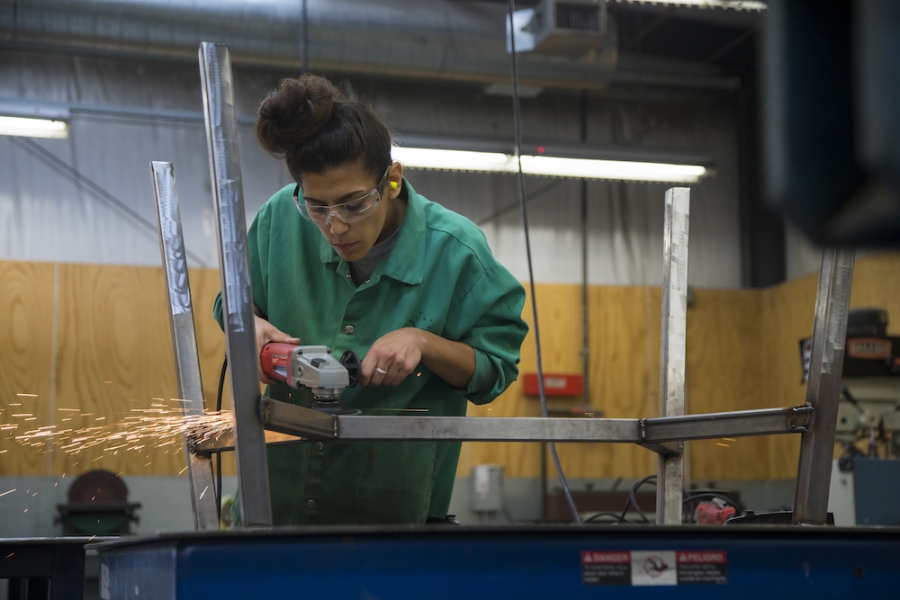 After serving four years in the Marine Corps, DaSilva followed her desire to paint to Otis College, where she fell in love with product design—and welding.
Lisa Butterworth

“I didn’t even know product design was a thing,” says Amanda DaSilva (BFA Product Design ’19). “But now that I’ve gone through it, and am so passionate about it, I love when people ask me, ‘What’s product design?’ I’m like, ‘It’s that chair you’re sitting in, that cup you’re drinking out of, that magazine you read yesterday.’ Everything is a product.”

DaSilva might not have known that product design was a thing, but growing up in Rhode Island, she was predisposed to building things, always choosing to play with Legos, Tinkertoys, and K’Nex over Barbies or dress-up. “One summer my brother and I had this gung-ho idea that we were going to replicate the Magic Kingdom from Disney World,” she says. “We begged my mom to take us to Michaels so we could get all this sculpting clay, and we had a piece of plywood we used to map everything out.” The plan fizzled after they constructed Main Street, but her interest in fabrication didn’t. DaSilva also recalls the trophy shelf she made in an 8th grade industrial arts class. “When I went home for Christmas, my mom had finally remodeled my childhood room. She was like, ‘All your medals and ribbons are in a box somewhere, don’t worry about it,’” says DaSilva. “I was like, ‘I don’t care about the medals and ribbons, what did you do with the trophy shelf?’ I wanted to see my craftsmanship at that time!” 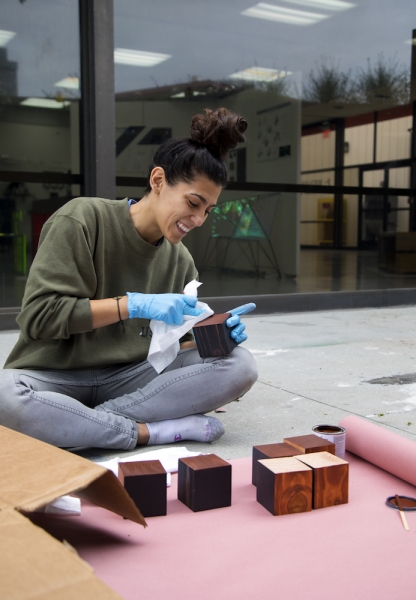 Working with her hands came naturally, but it was a desire to travel that led DaSilva to join the Marine Corps after high school. Of course, she jokes, her dreams of being stationed in Japan or Hawaii were dashed when she got orders for Yuma, AZ, where she spent the majority of her enlistment. After serving for nearly four years, DaSilva was figuring out her next steps when she decided to follow her love of painting and apply to Otis College on the GI Bill. It was here that a Foundation class called Drawing and Building Form changed everything. In it, students were required to build a 6x6-inch cube, first out of paper, then cardboard, and eventually wood. “Just to see the capability of bringing something from my mind to life, and for it to actually be functional, I think that’s amazing,” she says. DaSilva switched her major to Product Design, where she learned the entire process, from concept, to sketching, to three-dimensional rendering, to building and fabricating a tangible object. She was even surprised to discover her favorite medium: welding. “I wouldn’t have even known that I enjoyed welding until I went to Otis,” she says. “[The College] provides a full-on metal shop and wood shop and encourages you to take advantage of everything.”

The apprenticeship DaSilva was offered by SPMDesign, a local fabrication and design company while a senior at Otis College has since grown into a full-time position, a path the company initially proposed based on the strength of her portfolio, which included furniture pieces (such as welded steel-frame chairs with colored acrylic that can slide together to create a coffee table or bench), and even toys (she designed a bear named Terrible Teddy that children can use to create and document mischievous narratives). 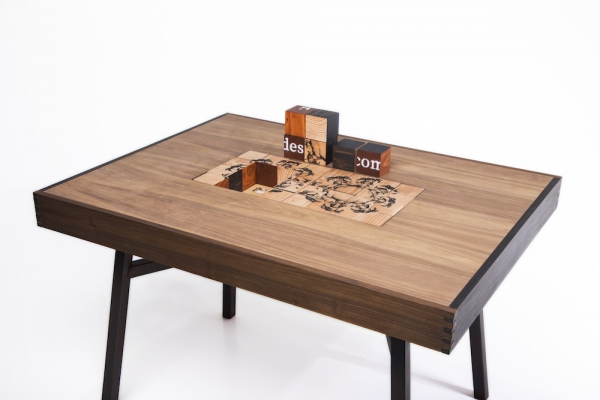 “I really enjoy creating products that entice some type of emotional connection,” DaSilva says, “more so than just mass producing some item that’s going to be purchased and then tossed into the landfill a few years—or even a few months—later.” The project she presented at her senior showcase perfectly exemplifies this philosophy: a dining table that fosters gathering, and at the same time offers an experience thanks to a collection of movable, three-inch wooden cubes that fill a cutout in the table’s center. The side of each cube has a different stain or finish; one is covered with chalkboard paint so that, when flipped a certain way, the cubes can be written or doodled on. DaSilva envisions creating different sets of cubes that could go with the table, ones that feature a map, or are made out of clay. “I just want to keep creating different functions,” she says.

Otis College allowed DaSilva to indulge her love of travel, too, with a trip to Blantyre, Malawi, as part of the school’s Creative Action program. The semester-long course included video chats with children at the Jacaranda School for Orphans, and a two-week stay there, where Otis College students taught workshops and spearheaded projects on site. It inspired the affordable, therapeutic chair that DaSilva is planning to design for children with cerebral palsy. Though the experience was life changing, she doesn’t necessarily need a destination to be inspired. “I’ll be walking through an airport and I’m like, ‘Why would they set this up this way? This is a design opportunity in and of itself,’” she says. “I view the world from a different perspective.”

To hear more from DaSilva about her experiences as a veteran student at Otis College, please watch the video below:

All photos and video by Fawad Assadullah/Otis College of Art and Design.