On any given day you might find senior Aaron Gonzalez sitting in the Commons drawing ideas; in the printmaking lab creating his own sketchbooks; or at the skate park next door to campus, an added bonus of going to Otis College of Art and Design. He might be hand-lettering announcements on the chalkboard in the Communication Arts office where he works part-time, or utilizing the campus laser-cutter in the 3D printing shop. And even if you can’t find him, you can certainly find his work: Aaron’s illustration, “Head in the Clouds,” was chosen for display to celebrate Otis College’s centennial. A large-scale vinyl print of it is prominently displayed on the second floor of Ahmanson Hall. 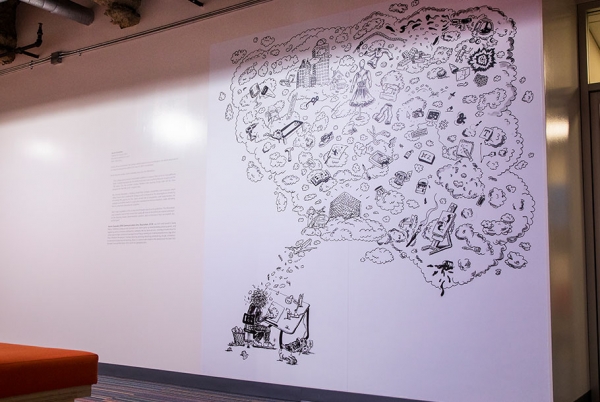 The piece is based on Aaron’s personal journey and creative approach. “The concept is that all ideas, no matter the assignment, start at the drawing board with a sketch or notes, and grow from there,” he says. The illustration features a person sitting at their desk. Above the figure bursts an enormous thought bubble filled with icons and images that represent the different opportunities and tools Otis College has to offer, from an easel and a dress form to a drill and screen printing items. Each detail reflects Aaron’s distinctive style and gives passerby a unique reason to stop and reflect. “People tend to get lost in it,” he says, “They find something new each time they look at it.” 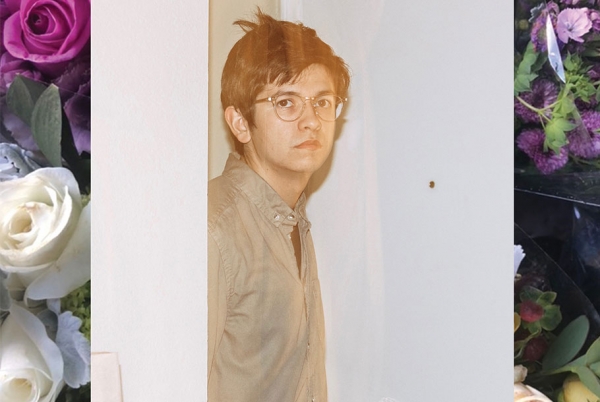 But this isn’t the only work Aaron has done for Otis College. With the enthusiastic response from Head in the Clouds came another opportunity – the design of the annual Otis College Admissions viewbook cover — seen by thousands of prospective students and parents from all over the globe.

“I appreciated the detailed nature of Aaron’s submission for the Centennial celebration,” says Sean Yoon, visual designer in the Communications and Marketing Department. “His work has a distinct style and quirkiness that I felt could also add a nice touch to the Admissions viewbook, a project I was working on around the same time.” 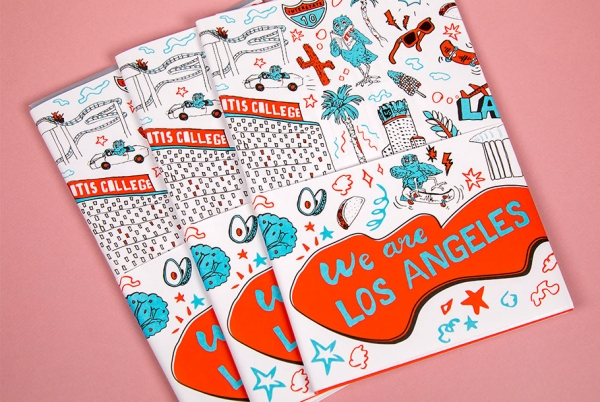 It’s an apt representation of how the 23-year-old feels about his experience as a Communication Arts student with a focus in illustration (he’s set to graduate in the spring of 2019). Coming to Otis College, from his Central Californian hometown of Santa Maria, “opened up a bunch of doors and opportunities,” he says. “I like the tight-knit community and that you are able to build relationships with your professors. I've been going around to other departments, looking for ways to collaborate with artists at Otis and just learn who they are because I know everybody here is doing something cool.”

To see more work from Aaron Gonzalez, visit his webpage. You can request a 2018-19 Viewbook, here.