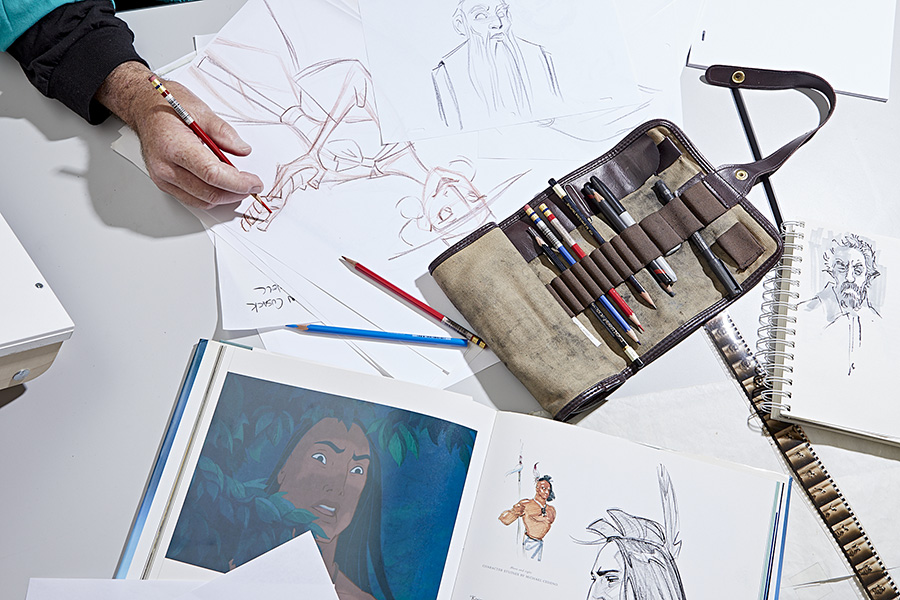 Mike Cedeno has played a major role in the creation and execution of a legion of animated characters you might be familiar with: Aladdin for one, The Little Mermaid’s Prince Eric for another (a character he says he was told to model after himself and Tom Cruise), and, oh, just one of the most popular princesses ever put to cel, Belle from Beauty and the Beast. 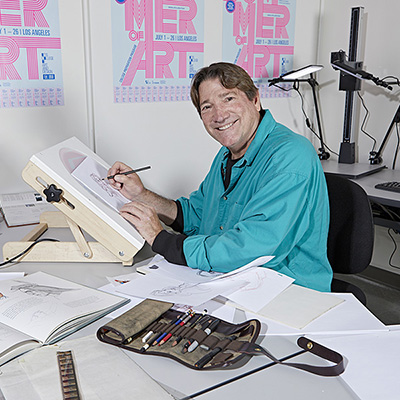 The artist and animator grew up wanting to be an architect, but was “always drawing,” he says. “I just love drawing cartoons; I had a knack for it.” Mike’s father was in the Air Force, and after growing up on the move (in various cities all over the U.S. and even Japan), he was accepted into CalArts’ first Character Animation Program class in 1976, before he’d even graduated high school. And it was that knack for drawing that got him hired by Disney when he was just 19 years old. His experience there spans classics from The Fox and the Hound to Atlantis: The Lost Empire. But there are a couple characters that hold a special place in his heart, like Cody from 1990’s The Rescuers Down Under—“he was like a boy Mickey Mouse,” he says—and Aladdin, too.  “I really loved animating him because he was so animated! He was always running and I enjoyed doing these characters that moved.” It’s not only his characters that are well known, his early Disney cohorts are too—spend enough time with Mike and he may regale you with stories of his former roommates, including Brad Bird (writer and director of both Incredibles films), former head of Pixar John Lasseter, and famed macabre filmmaker Tim Burton.

Mike has a reputation for bringing home-baked banana bread to class, but he’s most revered for his affable, if unique, pedagogical style. “I’m a very unusual teacher,” he says with a laugh. “I always tell my [animation] students, ‘I don’t want you to draw in this class. I want you to display what your intention is about what you want to convey. Because when you guys draw, you try to make a nice little picture, and that’s not what we’re here for. I want you to express your desire about communicating what you want to say.’” Getting students not to “draw” can be a challenge, but Mike has his techniques, including having students draw with a pencil attached to the end of a stick—to “see the whole perspective”—or with their non-dominant hand. “There’s such an incredible joy about somebody going, ‘Oh, I get it now! Animation is movement. It’s not moving pictures around,’” he says.

Mike is also a painter who creates vibrant, impressionistic flowers and landscapes, which influences his teaching style as well. He applies a fine art approach to animation, quoting advice he received from painter Harry Carmean: “He said, ‘The first line is a virgin line, and it’s completely out of your soul. The second line relates to that first line. And it continues on and you build it.’ That’s what animation’s about. You have a line that issues forth the movement and the process of what you’re trying to say. And that is an art form.” When asked what students take away from his class, Mike doesn’t hesitate: “It’s inspiration,” he says. “And inspiration comes in many forms.”

Mike is a lecturer in the Digital Media department and regularly teaches in the Extension program. This summer he’s teaching Character Design for Animation and Cartooning, as well as teaching in Summer of Art, an intensive, four-week, pre-college program for individuals 15 and older.