New Logo Unveiled at Otis College of Art and Design

At Otis College of Art and Design, the letter O has for many years served as its primary visual identifier, a typographic shorthand of the Otis College logotype.

On its own, the O can conjure a wide range of perspectives and associations. The basic circular glyph was first developed by the Phoenicians, who called it eyn, after the human oculus. In Zen Buddhism, the calligraphic gesture of the ensō, or circle, embodies a moment of artistic freedom through physical expression. The mark at once represents everything and nothing; the universe and the void. Artist and Bauhaus teacher Vasily Kandinsky, whose geometric compositions often centered around the circle, once wrote: “Of the three primary forms [triangle, square, circle], it points most clearly to the fourth dimension.” What lends to profoundly vast meaning, however, has not always made for a distinctive or memorable visual mark for a college of art and design.

A chapter of historic growth has led Otis College to rearticulate how it voices its values and approach to contemporary arts education. Ahead of its 2018 Centennial, the college proudly looks to the past and ahead to the future with the launch of a distinctive and dynamic new brand identity—one that seeks to re-engage the very act of seeing and making.

“The result is very simple, but very profound. It’s a big philosophy now, not just a rebranding,” says Otis College president Bruce Ferguson. “I know that when people see it for the first time, there will be a sort of pause before they get it. For our 100th anniversary, that’s what we want to say: Look at us again. We’re not the college you thought we were; we’re doing things differently.”

Below, a closer look at the development of the new visual identity for Otis College.

The college tapped Menno Cruijsen, creative director of the award-winning studio Lava Design, to devise of a dynamic new system that could emphasize the diversity and character of Otis College in a holistic yet flexible manner. The crux of that challenge, says president Ferguson, lay in finding a strategic way to “activate the O”—to make the overused mark do something specific, and importantly, memorable, all the while voicing the values that make up the Otis College ethos.

It was a tall order, with many narratives at play. As the city’s first independent professional school of art, Otis College lies at the foundational nexus of its creative community, and is the proud alma mater of countless pioneering artists. The former IBM Aerospace Headquarters—a 1964 structure by the legendary industrial designer, Eliot Noyes—houses the college’s Ahmanson Building at the heart of a vibrant and growing campus off Westchester’s Lincoln Boulevard. Recently renovated this year, the building is a living document of Southern California’s modern architecture legacy, and a testament to Los Angeles’ place on the map as an enduring art, design, and technology powerhouse. Otis College’s student body also proudly ranks among the most culturally diverse, and its various degree programs are among the best in the country. The recent introduction of campus dormitories and a change in administration have also reinvigorated the wider community, creating a great opportunity for change in how it identifies in both internal and external communications.

As an Amsterdam-based designer and a visiting faculty in Otis College’s MFA Graphic Design program, Cruijsen holds a fresh perspective into both the school and the city. “L.A. is really the boiling point of Western culture, the mothership. For me, both the city and the school represent a completely collective world,” says the designer. The challenge of designing a new visual brand for Otis College, he adds, boiled down to one central question: “How do you tie that diversity up into an idea without stifling it?”

The Circle Takes the Square

For all of its simplicity, the letter O, overused by countless other entities bearing the same name, had become an empty signifier for the school. An elevator company by the name of Otis, for one, bears an uncanny resemblance to the college’s preexisting logotype, with its straightforward use of sans-serif lettering—this was just one of many problematic instances that called for the design of a new brand identity.

“The roundness of the O and the hard-lined aesthetic of the Ahmanson Building—a structure that surprised me when I visited Otis for the first time—were at odds with each other. They didn’t correspond,” observes Cruijsen. “That was the first move: to break with the form, that roundness, that we had all been used to.”

A local landmark and a well-known icon of midcentury modern architecture, the Ahmanson Building is clad in a concrete skin that is punctuated with a checkerboard-like pattern of rectangular, light-filtering apertures along a strict grid. Noyes, a former student of Bauhaus founder Walter Gropius, had created the facade to resemble the holes found on computer punch cards—a formal reference to the cutting-edge data computing machines the building was designed to house.

By superimposing the identity onto the building itself, Cruijsen devised a simple yet effective solution: Subvert the O, and replace it with a rectangle.

This act of censoring or abstracting, says Cruijsen, provided the “Eureka moment” for the new visual identity. Taking away the over-familiar O, paradoxically, makes it stronger by negation—a self-reflexive mediation on positive and negative space. Evoking the hard lines of Noyes’ iconic design, presenting Otis College through this new lens also presents a powerful statement on placemaking, and a bold celebration of its unique campus and community.

Befitting of the college’s progressive approach to arts education, this courageous new form, in turn, becomes an instructive and self-reflexive exercise in looking and thinking. The use of a square O triggers a brief sense of pause in the onlooker, even as he instantly perceives its semantic meaning. Rather than reinvent the wheel, this new manner of seeing reinterprets it. “What this new brand identity does is make you an active viewer, rather than a passive viewer,” says Ferguson. “Interpretation is a cognitive activity, whereas looking is a kind of passivity.” In other words, the new brand identity is a form that asks you look—then look again.

Established in 1918, Otis College takes its name from General Harrison Gray Otis. The Los Angeles Times publisher whose bequeathed estate dedicated to the "advancement of the arts" became the college's first campus. Over the years, the school’s official brand identity has been distilled down to simply Otis, and in many occasions, as simply an ‘O.’ While emphatic in its simplicity, however, the existing Otis brand does little to stand apart from other entities bearing the same name (or letter). “Otis as a name is just a name, in effect,” observes president Ferguson. Like the rounded letter O, “It’s a free-floating signifier or adjective, in a way.”

To that end, Otis College, rather than just Otis, will now appear in full, used by the school across all media platforms moving forward—a simple sticking point that will serve to disambiguate, clarify and strengthen name recognition. “If you go online and search, you’ll see thousands of Otises,” says Ferguson. “Marrying ‘Otis’ to ‘College’ is one of the simple changes we needed to make.”

A Building Block For All Scales, From Font To Facade

Simple in gesture, the new square ‘O’ signifier lends itself to a range of uses and a programmatic flexibility. Consistent with the college’s previous visual identity, the new system will be set in Univers, a classic sans-serif typeface that features prominently in Swiss modern graphic design. Designed by Adrian Frutiger in 1954, the Univers font family is characterized by square letterforms drawn for legibility, and contains a wide and comprehensive range of weight and styles that allow for diverse use.

It’s a typeface well suited for the formal rigors of the modernist grid—a tool that itself serves as the foundational building block for countless creative disciplines, from architecture to graphic design and illustration. Cruijsen formed the underlying framework for the new brand identity by abstracting the grid used by Noyes to design the Ahmanson building’s distinctive facade—an apt visual metaphor that looks simultaneously to the college’s past and future. 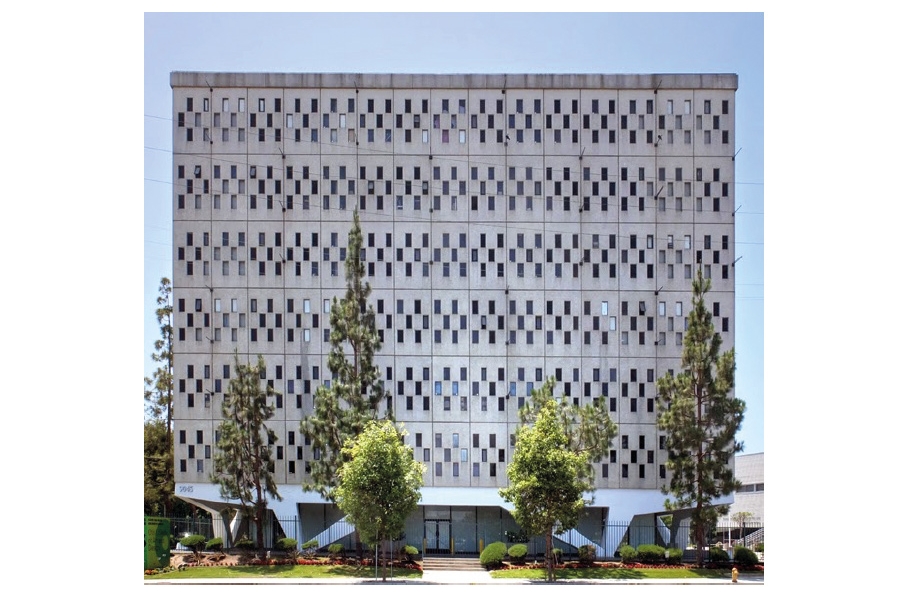 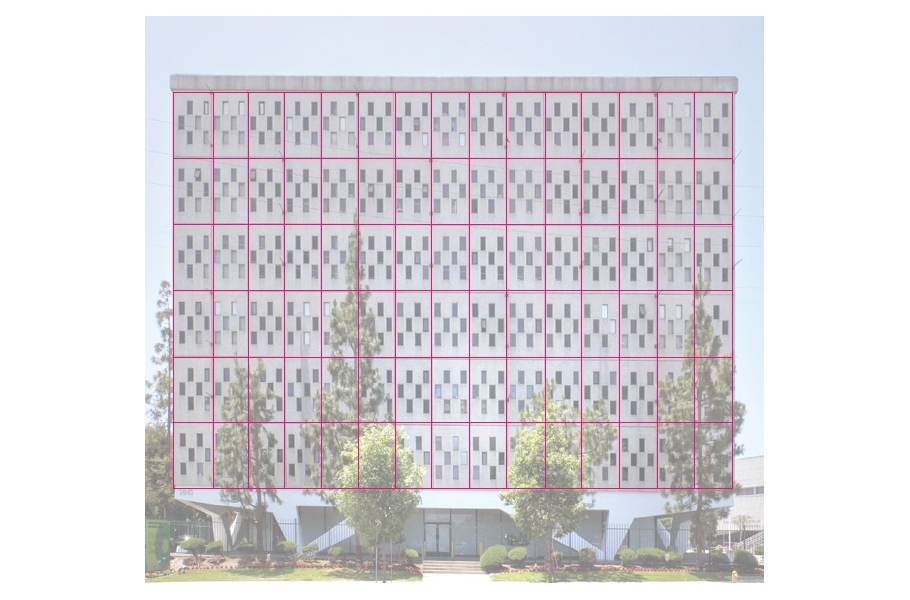 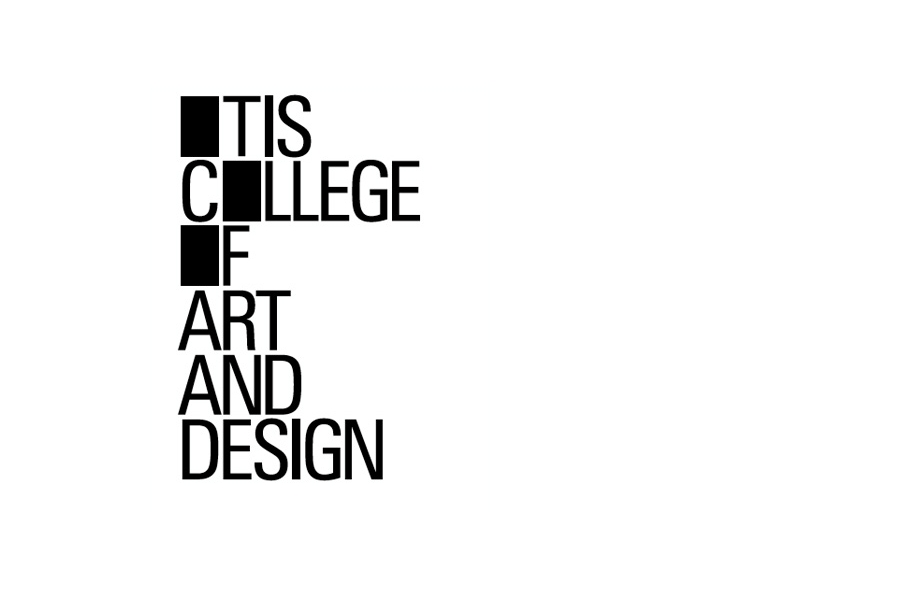 An Open Grid For Everyone

Flexibility is the backbone of Otis College’s new visual vocabulary. While the new Otis College identity is established around the square signifier and the grid, it is, most importantly, designed to operate as a dynamic platform that eschews the monolithic, static branding approach of the 20th century. The new brand identity is rather “an idea that would unify everything; a system that you can fill with any kind of movement in any kind of context,” says Cruijsen. “An open grid for everyone.”

Activated for flexible use, the new square O acts as a frame, an open window, and a blank canvas—a modular system that can be freely employed for creative expression throughout the college’s messaging.

“The new brand identity includes some fixed visuals, but they are set within a framework of experimentation,” explains Otis College creative director, Anne Swett-Predock, who will implement the new branding system across all media platforms. “Those parameters are what will make the new brand consistent and recognizable, and define how those visuals will be used.” Swett will be collaborating closely with Cruijsen in the coming months to refine that set of guidelines—what they refer to as tools, rather than rules.

It’s a delicate balance that tempers structure with an open-endedness that allows for chance, but not too much: At its basis, those guidelines entail setting all text in Univers along a set grid. As a logotype, the words Otis College will appear in a fixed format, set in all caps with square Os and arranged in a left-aligned, vertical stack. Beyond those guidelines, the potential applications are wide-open. On an announcement for an upcoming gallery exhibition, the square O might be used to contain an artwork, portrait, or graphic; on a business card or letterhead, it might take the form of a die-cut. On screen, it appears almost as a cursor, and may extend itself well into video frames, animations, and larger messaging campaigns—or even digital platforms that have yet to be developed. 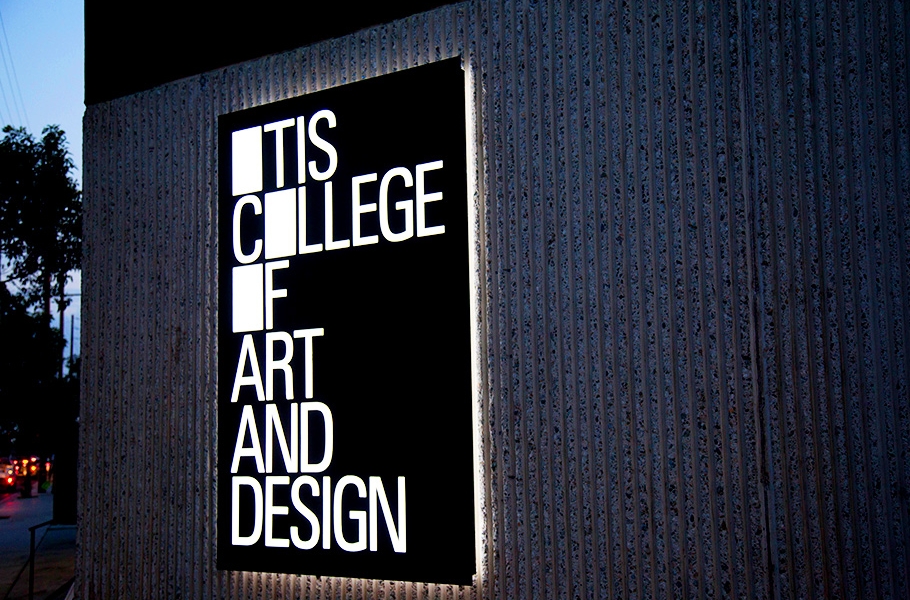 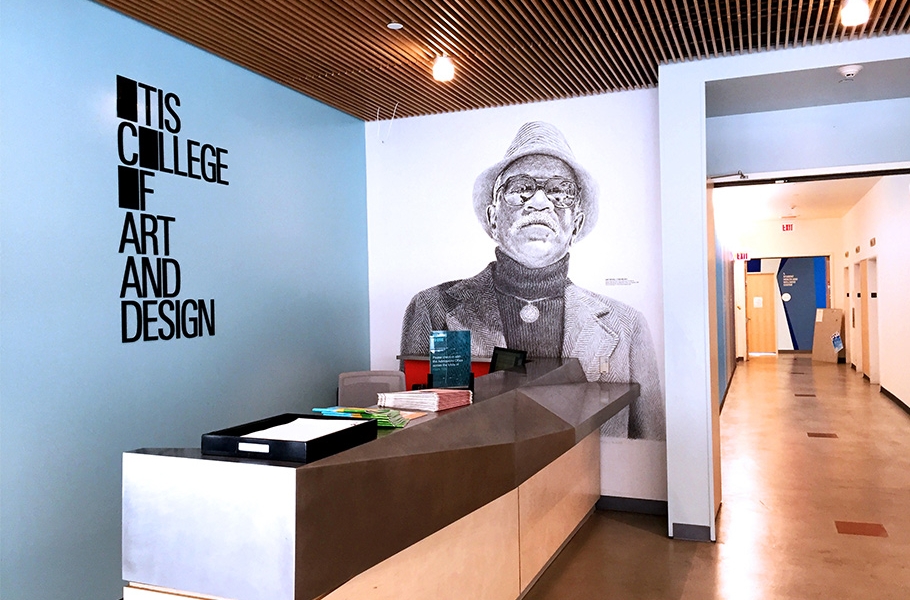 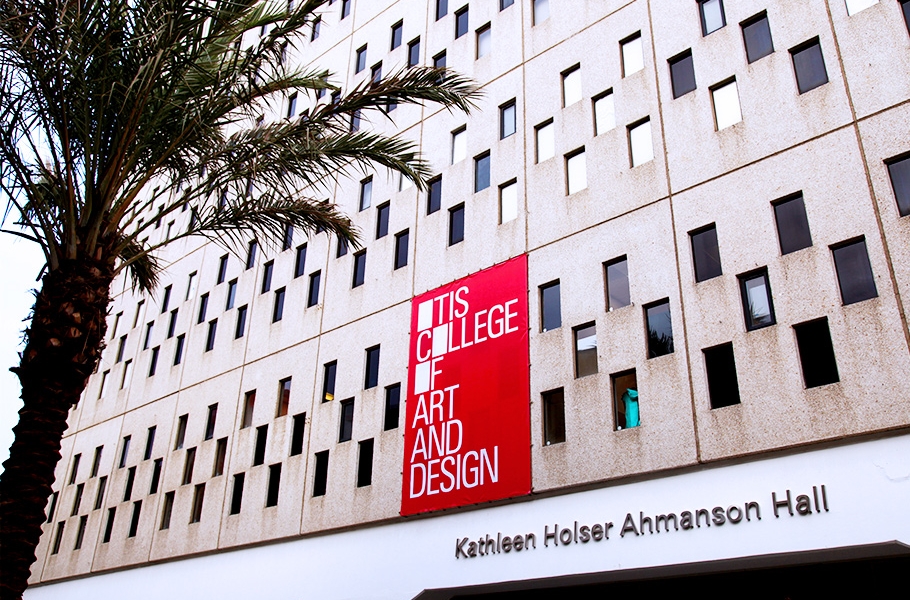 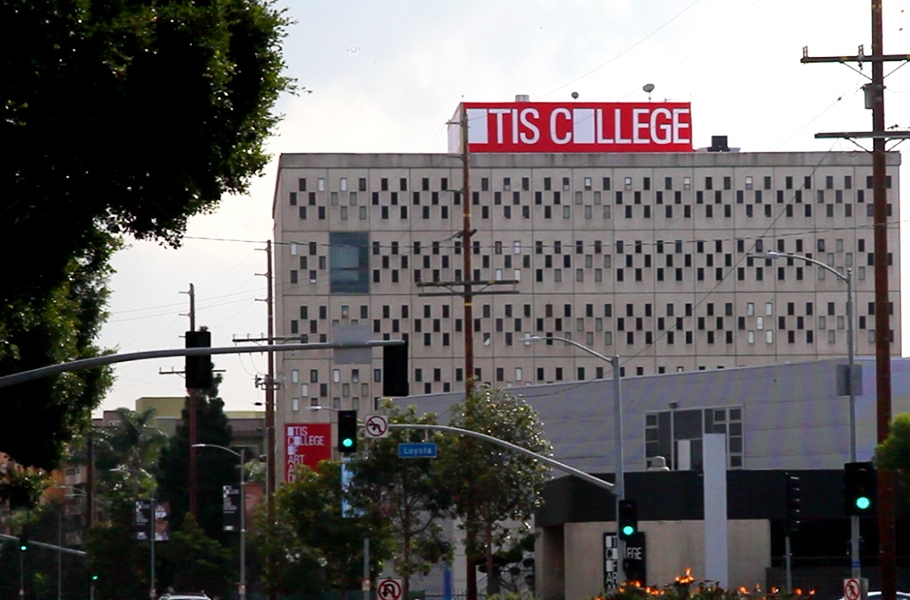 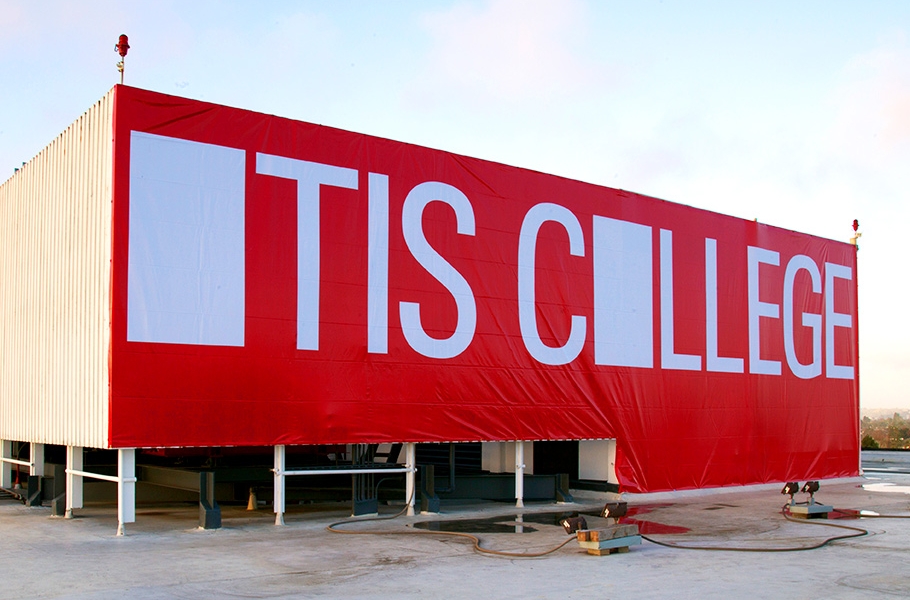 “The new brand system is a living, moving, breathing entity. It’s conscious of the people who are going to be engaging with it. It considers interactivity, and it is anything but stationary; that’s what makes it super exciting,” says Kali Nikitas, chair of the communication arts and MFA graphic design programs at Otis College. “We were known by the circle—the ‘O’—and now we’ll have the rectangle. That rectangle is going to allow us to incorporate imagery, and to really make the brand identity a lot more active.”

Reflexive, flexible, and wholly distinct, the new branding system establishes Otis College as a cutting-edge voice in the art and design landscape—a truly 21st-century institution that recognizes branding as a pluralistic, experiential platform in itself, open to evolution.

“The new brand identity gives us an enormous amount of possibility. It announces us as a different kind of player, and most importantly, it is memorable,” says president Ferguson. “Just looking at it engenders ideas: You can look at it as an empty page, or an outline that you place images inside, in a sense. It could be like a painting, an installation, or even a floor plan.”

“That’s the brilliance of it,” he muses. “The new ‘O’ is the missing piece that you fill in yourself.”

Aileen Kwun is a writer and editor based in New York. A former Senior Editor at Dwell and Surface, she is the author of Twenty Over Eighty: Conversations on a Lifetime in Architecture and Design (Princeton Architectural Press), and a proud Southern Californian at heart.