Love came fast for Kelley Mogilka and Mason Williams, who met in June 2018 during the L.A. Summer Residency.
Anna Raya 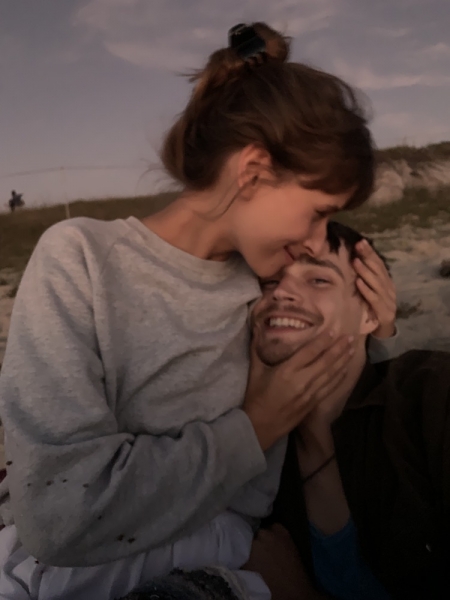 Kelley Mogilka and Mason Williams are proof that meet-cutes don’t just happen in the movies. It was June 2018 and both had arrived at Otis College to attend the L.A. Summer Residency. After the group of 30 residents met on the Commons on the first day for introductions, they set off for a tour of the campus and facilities. “Mason and I just sort of gravitated towards each other,” Mogilka says. “It’s a big group of people, no one knows each other, and we just got closer and closer as we started walking. He looked at me, smiled, and said ‘hi.’ And that was it for me.”

Says Williams: “The entire tour was ridiculous because every room we went into, and every elevator we went into, I was either next to Kelley or looking for Kelley. I had a huge crush on her right away, totally trying not to be obvious about it.”

Things were meant to be for the couple, because as it just happened, their studios were right next to each other. As part of the L.A. Summer Residency, each artist or designer gets their own dedicated, semi-private, 24-hour access studio space. Mogilka had arrived in L.A. a day earlier and had already scoped out the space, and whose studio was assigned near hers. “I was totally nervous as to what amazing artists would be in the room with me, so I had Googled all of them,” she says. “Mason Williams came up as either the famous guitarist, or a renowned visual artist who has a painting of a bus in MoMa. When he introduced himself I was like, ‘Oh, your studio is right next to mine. You aren’t in the MoMa are you?’ He laughed and said no. It was really nice because there was another young artist—same age as me—who was just as new to it all.” 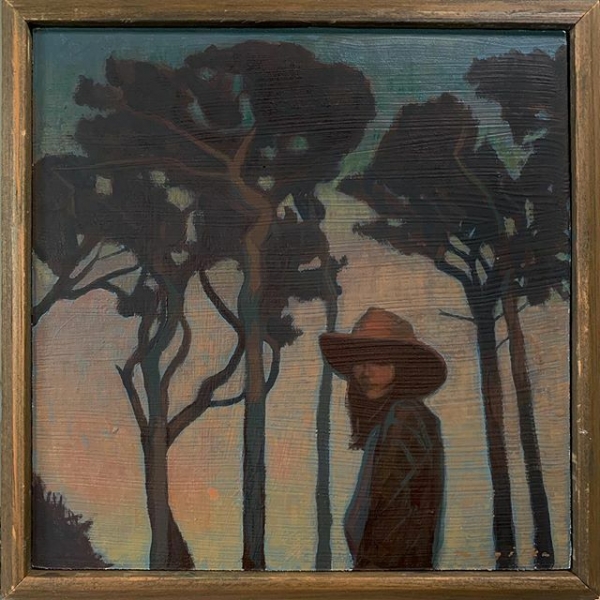 Mogilka, who’s from Edmond, OK, had just completed her BFA in Studio Art at Oklahoma City University and didn’t know what she’d do after graduation. She applied to Otis’s L.A. Summer Residency at the suggestion of a professor. “It was the perfect fit for me,” she says. “No obligations, tons of educational opportunities, and a month to explore in my own studio.” 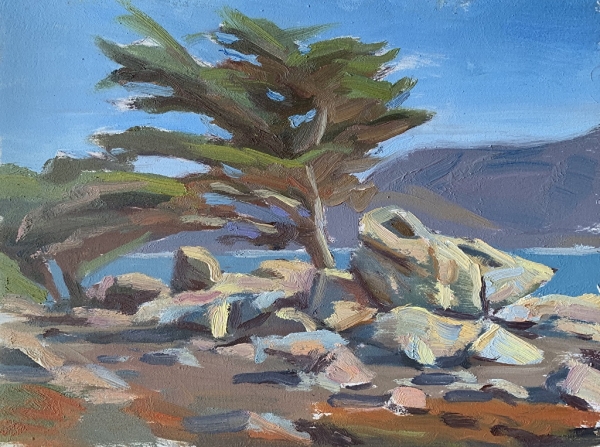 Carmel, CA native Williams, on the other hand, had been scrabbling away at a desk job at Apple after receiving a BA in Studio Art from Principia College in 2017. “I quit in hopes to pursue a full-time career as a painter,” he says. “I thought one of the first steps was to get into a residency program, where I could learn and surround myself with like-minded individuals. I had no idea how much it was going to change my life.”

The other artists in the studio space near Mogilka and Williams included South African native Anna-Carien Goosen, Berkeley artists Tracy Child and Zander Bice, and Lisa Woods, from Texas. “Really, if you want to talk about a love story, our studio group became like a family,” says Mogilka. “We all went out to get ice cream together on the first day. There was one cubicle that was open in the back that we turned into the ‘coffee corner.’ We would all go rent books from the library and leave them back there, and that’s where we would all go to have coffee, snacks, and refuel for inspiration.” The group even named their studio space “Le Flab,” for “the figurative lab.” They bonded over group dinners and trips to Los Angeles’s many museums. 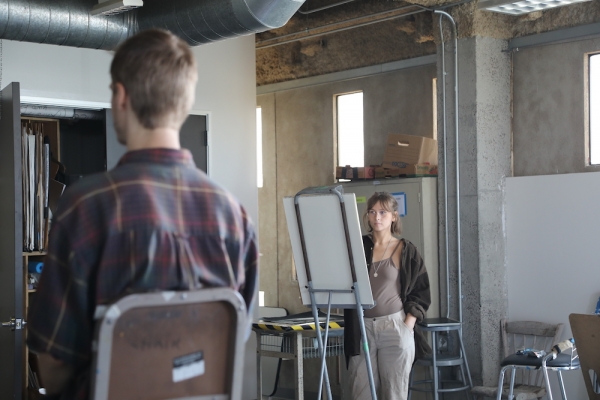 Mogilka says that their studio mates constantly joked about the sparks that flew all around her and Mason. “We were practically attached at the hip the whole time,” she says, “geeking out at art museums and staying up late working in the studio together. It was the most romantic experience of my life.”

Mason recalls one night during the second week of the program when they were hanging out drawing, and talked about going to grad school together. “Eventually, the elephant in the room was brought up indirectly when Kelley jokingly said, ‘You just want to go to the same school as me because you love me, huh?’” Williams says. “I was so surprised, not only by her assumption that I loved her, but also by my own realization that I did. And so I admitted it right then and there. It was the most magical and instant connection I’ve ever had with anyone.”

Things got a little complicated at the end of the month-long residency. “It was like a tidal force that we couldn’t stop,” Williams says. “We even tried—I mean, we lived in different states. How would it work out?”

“It was really hard to fly back to Oklahoma,” Mogilka says. “We didn’t know if we’d ever see each other again. I tried to convince myself that he would be ‘the one that got away.’”

But Goosen and Child, who Williams describes as their “residency parents,” and who had encouraged the couple’s connection, had other ideas. Child invited Mogilka to be her roommate up in Berkeley, and share a studio space. “I knew there was nothing left for me in Oklahoma in terms of my career, so I packed up all my things, and I went,” Mogilka says. “I drove across the States, and up through Carmel, where Mason is from, and we were reunited. And yes, it was definitely like in the movies.”

In April 2019, the couple relocated to Pacific Grove, near Monterey, CA, where they live together and practice their art together every day, Mogilka in representational painting—the Impressionists are a big influence—and Williams in plein air painting. “Kelley and I love the same artists, and go nuts over the same aspects of painting, and enjoy painting similar things,” Williams says. “It was really easy to blend our art practices together. We apprenticed under John Burton together, we hire models for photoshoots together, and we go to figure drawing classes together. We critique each other’s work. In a way, we are business partners, and sometimes we have to remind ourselves that no matter how much fun we are having painting together, we need to do something fun that isn’t painting! But then we’ll be out at dinner and start sketching each other, or talk about paintings we saw on Instagram. It’s been impossible to separate our relationship from our practice.” 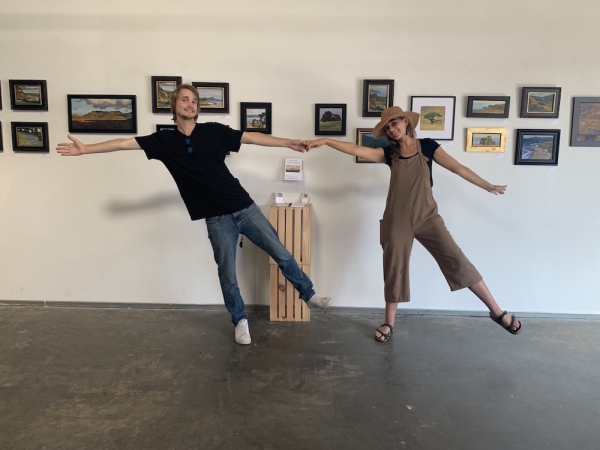 The couple even had their first duo exhibition the same day as their one-year anniversary. They’re also hoping to have a Le Flab reunion/group exhibition someday soon. “We’ve all remained really close,” says Mogilka. “Tracy ended up becoming my best friend. We FaceTime with Anna-Carien all the time. And we get lunch with Zander in Berkeley on occasion.”

“Both professionally and personally, [the Residency] has truly changed our lives,” she continues. “It’s become like a pedestal that we can put our love on, and refer back to when we’re feeling like we’re too deep in our work. We’ll just randomly say, ‘Remember at Otis…’ and it brings back all the memories and feelings with it. Otis will always have a special place in our hearts.”

Applications still are being taken for the 2020 L.A. Summer Residency program, which will have two sessions: May 24-June 12, and June 14-July 3. For more information and to apply, click here.

Do you have an Otis love story that you’d like to share? Email us at communications@otis.edu, we’d love to hear all about it!

Main image, and photo of Mogilka painting Williams, by Fawad Assadullah. All other images courtesy of Kelley Mogilka and Mason Williams.