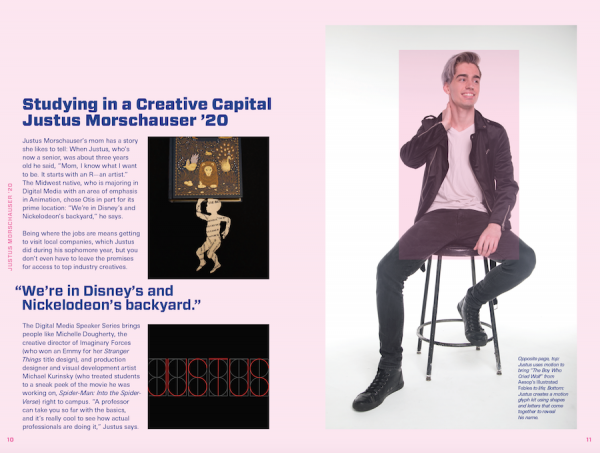 Justus Morschauser’s mom has a story she likes to tell: When Morschauser, who’s now a senior and was featured in this year’s Admissions Viewbook, was about three years old he said, “Mom, I know what I want to be. It starts with an R—an artist.” The Midwest native, who is majoring in Digital Media with an area of emphasis in Animation, chose Otis College in part for its prime location: “We’re in Disney’s and Nickelodeon’s backyard,” he says.

Being where the jobs are means getting to visit local companies, which Morschauser did during his sophomore year, but you don’t even have to leave the premises for access to top industry creatives.

The Digital Media Speaker Series brings to campus people like Michelle Dougherty, the creative director of Imaginary Forces (who won an Emmy for her Stranger Things title design), and production designer and visual development artist Michael Kurinsky (who treated students to a sneak peek of Spider-Man: Into the Spider- Verse while he was still working on it). “A professor can take you so far with the basics, and it’s really cool to see how actual professionals are doing it,” Morschauser says.

The Priority Deadline for the BFA program at Otis College of Art and Design is Saturday, February 15, 2020. For more information and to apply, click here.

Photo and video of Justus Morschauser by Fawad Assadullah.