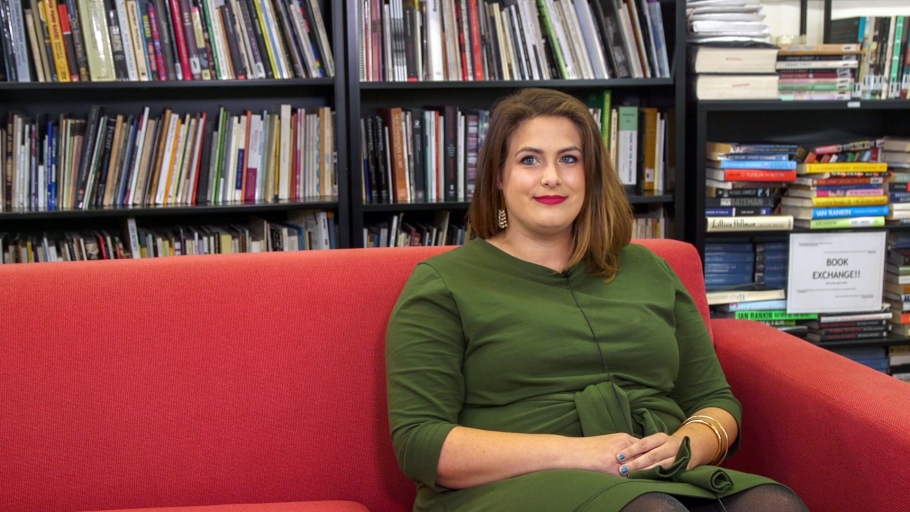 Halley Sutton (MFA Writing ’17) was about two-thirds of the way through her manuscript when she hit a wall, unable to figure out how to tie together all the threads of her “modern feminist noir.” So she got a giant piece of poster board, covered it with differently colored Post-it notes representing her various plotlines, and lugged it to the office of Peter Gadol, her thesis advisor at the time, and Otis College of Art and Design’s MFA Writing program chair. “I was like, ‘Peter, I don’t know what to do! Help me!’” Sutton says with a laugh. The two sat on the floor, rearranging Post-its until Sutton resolved how she’d finish writing The Lady Upstairs, which Putnam will publish in summer 2020. The book is about a woman, Jo, whose work taking down terrible men lands her in the grips of a dark criminal underworld run by an enigmatic female boss.

Sutton, who got her bachelor’s degree in creative writing from the University of California at Santa Cruz, already had in her head the novel’s brassy femme fatale lead before applying to Otis, but her novel really took shape during her time in the program. She credits her instructors with helping her find her voice, introducing her to writers who inspired and influenced her, and also the campus’s location. “The novel probably wouldn’t have been a noir if I hadn’t moved to L.A.,” says Sutton, who left the Bay Area to start her program at Otis. “Noir had such deep roots in L.A. history, in its film and literature, and I thought, ‘Well, maybe this is a weird way that I can start to understand my city.’ Once I made that connection it just clicked and the plot unrolled from there.”

Sutton graduated Otis in May 2017 with a finished first draft, then honed her manuscript with the help and feedback of former classmates-turned-friends, as well as feminist thriller author Layne Fargo, who selected Sutton for a mentorship as part of the online program Pitch Wars. Less than six months after querying agents, Sutton sold her book. For the author, who knew at the tender age of six that she wanted to be a writer, the book deal was a lifelong dream realized. “Book characters were as much my friends as my real friends,” Sutton says. “I always knew that I wanted to create that experience for someone else.” Getting the news that her book would be published, “felt like pure effervescence,” she says. “It was unbelievable. It was amazing. It was the best feeling in the world.”