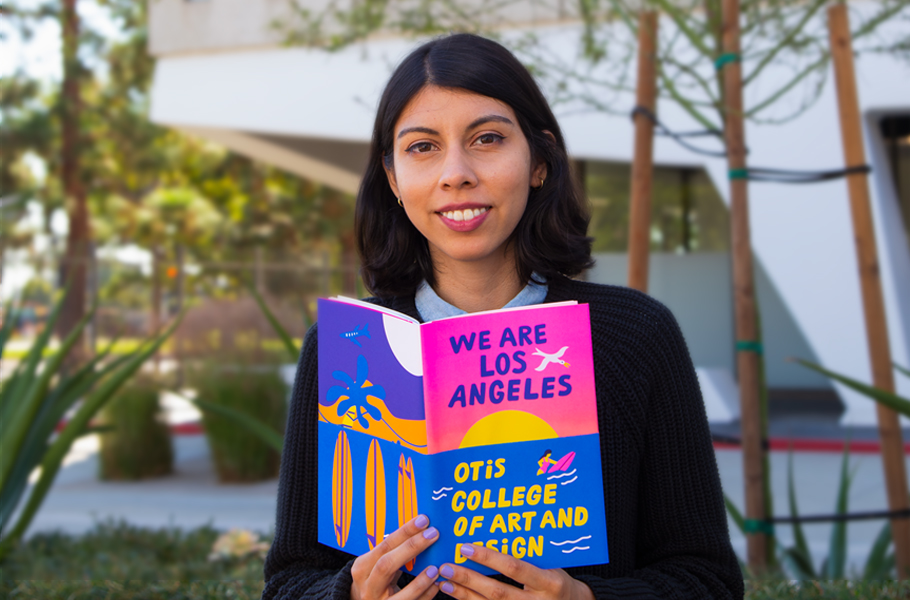 You might not guess it from her playful, whimsical style of illustration, but senior Daisy Rosas, who designed this year’s Otis College viewbook cover, has painter Bob Ross to thank, at least in part, for inspiring her interest in art. “When I was little, my dad bought the Bob Ross painting set and videos. He would work all day and then come home and try to teach himself how to paint. And I would try to paint alongside him,” she says with a laugh. “It became a possibility for me. It’s just something that was in me that I knew felt joyful for my being.” 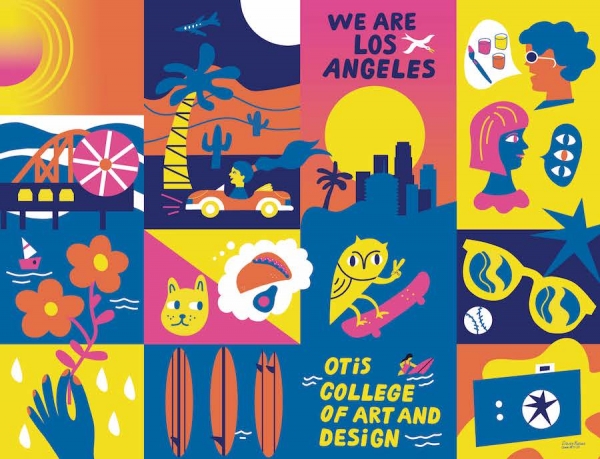 That sense of joy permeates Daisy’s work, which she’s been putting out into the world via Dog Knit Sweater, the Los Angeles studio she co-founded with her partner, illustrator Danny Miller, in 2011. The pair started by collaborating on zines, “then we were like, ‘Oh, we should do more of this since it’s so fun!’” Rosas says. (The studio’s name references her as-of-yet-unrealized dream of opening an online shop selling nothing but hand knit dog sweaters.) In addition to putting out zines, prints, editorial illustrations, and even ceramics, the pair has made their mark with murals on some of L.A.’s most iconic indie venues, including the former Westlake location of Bob Baker’s Marionette Theater, and The Lyric Hyperion Theatre & Café in Silver Lake—where colorful anthropomorphized birds are open mic-ing, guitar playing, and puppeteering across the exterior.

The two have distinct yet complementary styles (“I like to think a little more loose when I draw, I like a lot of ink and lines”), but there’s at least one major source of inspiration that Rosas and Miller share: “We both have a really big love for children’s books. We grew up reading them, and being read to,” Rosas says, naming Where the Wild Things Are author and illustrator Maurice Sendak as a particular favorite, and her most recent inspiration, a book called Stories for Little Comrades, which features children’s book illustrations from 1920s Soviet Union. “I really love how anything can happen in a children’s book. When we’re drawing we try to keep it limitless in that way.”

Rosas came to Otis College to further her craft by studying illustration, but an archiving project during a summer internship at the College’s Ben Maltz Gallery following her sophomore year ignited her love of typography and design. “I had this moment where I was making a poster and I was like, ‘You know, I really love letterforms and I want to explore that.’ I see them more as shapes and illustrations, and I just think they’re beautiful,” she says. “I’ve always drawn and I do freelance illustration outside of school, too, so it felt a little too familiar to me. I wanted a bigger challenge.” Rosas switched her major to Communication Arts/Graphic Design—she’ll even get to develop her own typeface in a type design class this semester, which is just the kind of opportunity she came to Otis College for in the first place. “It felt like a place where people were constantly making cool stuff,” she says, recalling her first visit to campus. “I just felt like I belonged here.”

Sheharazad Fleming, Creative Director in the Communications and Marketing Department at Otis College, felt a special affinity with Rosas before embarking on the design of the 2019-2020 Viewbook. “I could immediately identify her innate affinity for illustration, and that it was coupled with a passion for design and typography,” Fleming says. “After noticing a framed print that I have in my office, [Daisy] told me Sister Corita Kent was one of her biggest inspirations. From there the conversation bounced from punk rock to puppets, and I was convinced that she was the next artist for the Otis student poster series. At first her work seems optimistic and exuberant, but dig a little deeper and you see that it can have darker undertones, fueled by spirit and humor. She has a unique point of view, and to me she exemplifies what makes Otis students so special.”

You can request a copy of the 2019-2020 Viewbook, which features Rosas‘ work, by clicking here.

Portrait and video by Fawad Assadullah.